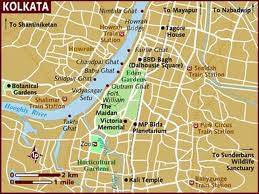 Kolkata (22033’N and 88020E) (previously called Calcutta) is the capital of the eastern Indian state of West Bengal and the third largest city in India after Mumbai and Delhi. It is one of the most densely populated cities of the world. In 2011, at the time of the last census, Kolkata’s population stood at 4486679, population density being  24252 persons per square km.

After obtaining permission from the local ruler (the Nawab), Job Charnock, the Agent of the East India Company, landed in the village of Sutanati, a trading village, on the 24th of August, 1690 to establish the headquarters of the Company in India. This date is generally recognized as the first major step in the development of the city of Kolkata. Kolkata for a long time was considered to be second city of British Empire next to London. It remained the capital of British India for more than 137 years till 1911. The city is considered as a cultural capital of India.

For details of the city of Kolkata, visit the website of Kolkata Municipal Corporation www.kmcgov.in

This website was built with Webnode
You can also have an impressive website for free!
Try it out